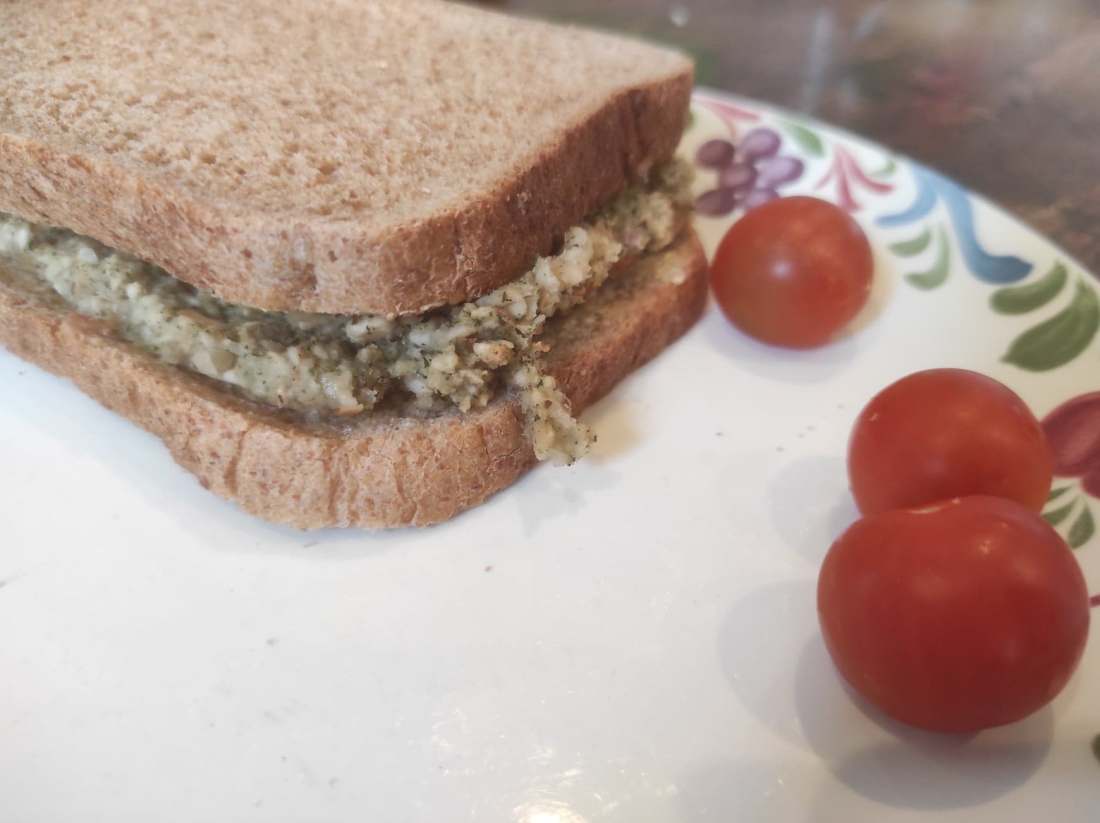 Last night I couldn’t sleep (despite a very filling dinner) so watched a film in bed. I was very tempted to have a snack to help me stay awake but managed to restrain myself! A lie in the next day as I had a day off made it a bit easier to get from breakfast through to lunchtime (as there was less time between them). Even this was a luxury though – I usually work 12-hour shifts and I don’t know how I’d manage to do that on £1 a day worth of food, and lots of people have other responsibilities to get up for too!

I have found myself thinking about food a lot recently – whether that is the psychological effect of being limited in what I’m eating or a genuine desire to have a bag of crisps every five minutes I’m not sure! So far neither of us have felt desperately hungry which is a relief, although I think it’s fair to say we’ve both been a little grumpier than usual!

We made some stuffing sandwiches for lunch (an unusual but cheap filling which we both could agree on!). I had to unexpectedly rush into work for a late shift, so I took some of the leftover sauce with rice for dinner. I left it as late as possible before I ate, because I wasn’t finishing until midnight and wanted to string it out as long as I could but I finally cracked at about half nine. It was slightly torturous when people were passing round mini eggs and ordering McDonalds but I managed to restrain myself!

Norwich foodbank is heavily reliant on volunteers and during the pandemic, the charity has been delighted, humbled and at times overwhelmed with the generosity of time offered by exisiting volunteers to take on new roles or more tasks, and new people wanting to get involved because they can.

Pre-covid, the charity utilised around 200 volunteers across it’s 10 distribution centres, in the warehouse, in the office, in the transport team, at the holiday project FISH and at supermarket colelctions. Some volunteers helped weekly, others on a rota perhaps fortnightly or monthly and others on an adhoc basis.

Since March 2020, the charity has worked in quite a different way – not least with all centres closed and a 100% delivery model in palce – and currently has around 90 active volunteers involved regularly.